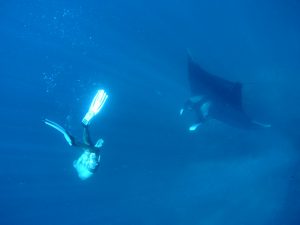 In Costa Rica we can observe a wide variety of wildlife, due to its geographical position to be found as an intermediate point between the two continents, North and South America. Thanks to this bridge that formed Costa Rica next to Panama connecting the two continents, a very varied mix emerged. Costa Rica has a neotropical climate and a great diversity of habitats and microclimates. It is estimated that 4% of the world’s species are found in Costa Rica.

If you like marine fauna and flora Costa Rica will not disappoint you, we can find endless fish in addition to humpback whales, dolphin groups and striped blankets. The screw dolphins will surprise you with their stunts, since they can jump and take up to seven laps out of the water.

Near the coast we can see them in smaller groups but in deeper waters they reach up to 500. The blankets will also impress you especially in the Gulf of Papagayo, Guanacaste with its exhibits.

The swordfish: it can be blue or black, it is a very strong and resistant fish and appreciated by fishermen. They are found in the southern part and on the way to the north Pacific coast.

The very famous sailfish, usually jumps out of the water and spend almost the longest time in the air, is not as strong as the swordfish but just as imposing and with a unique appearance. The dorado, a fish with yellowish and blue colors also called dolphin fish. Tuna, this fish can reach 300 pounds of foot, is always in constant motion. Other fish that we can find closer to the shore could be: The rooster fish: named for its dorsal fin that resembles that animal, they are usually seen near the waves and on the sandy bottom. The snapper is a fish normally clueless, shallow water and usually found on the coast. The wahoo: these fish usually choose rocky spots and islands in the open sea.

Guanacaste belongs to the Tropical East Pacific kingdom. Guanacaste in Costa Rica is a province that stands out for its terrestrial and marine biodiversity found in its National Parks and Natural Reserves. The marine environments are very varied and within them different species merge, their marine systems are differentiated from each other by the combination of salinity, geological forms and depth. In Guanacaste we can see pelagic fauna such as: tunas, sharks, turtles and cetaceans for example, and benthic fauna which include sponges, molluscs, crustaceans, tunicates and seaweeds for example and are found more in the depths. We can also observe that there are coral and reef communities, and octocorals such as fans and sea fingers. Within the marine fauna we can highlight fish such as sails, marlin, sharks, horse mackerel, tunas, manta rays, and other smaller species such as golden rays and hawks.

We can also highlight the presence of marine mammals such as dolphins and it depends on the time of year we go to see whales, especially humpbacks. Sea turtles are famous, such as the sea turtle, the Pacific green turtle, the leatherback turtle and the hawksbill turtle, which is one of the most endangered species.

The Marine Sector extends up to 12 nautical miles (22 kilometers) offshore in front of Naranjo Beach, Nancite Beach and Punta Varas, the other section extends to the northwest by 3.24 nautical miles, that is 6 kilometers to the sea following the contour of the coast. In Guanacaste different activities are carried out in order to maintain and improve marine life, they are directed towards the conservation of biodiversity. Marine control and protection tasks are complemented by others such as research, biological education, ecotourism, etc., which are carried out throughout the ACG.