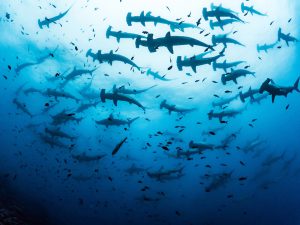 The shark, like other migratory and abundant fish in the waters of the Eastern Pacific Ocean, is a species of commercial interest, which has management regulations both internationally and nationally. However, sharks are really vulnerable since with respect to other organisms (bony fish, crustaceans, mollusks), they have a lower reproductive rate and natural mortality. These animals before a constant pressure of capture, will take much longer to recover. Sharks belong to the most threatened group of marine vertebrates, since in recent decades massive shark fishing has not ceased, being intensified. Sharks are among one of the oldest animal groups that still exist today. They began to appear in fossil evidence about 400 million years ago. The first sharks looked very little like modern day sharks.

The most common seen on the Pacific coast are white tip reef sharks and nurse sharks. On the bat islands in Guanacaste we also have a collection of bull sharks in the area. Hammerhead sharks are seen mainly in the Coco Islands along with white tips, tiger sharks, Galapagos and silky sharks and occasionally whale sharks.

Costa Rica has had very few shark attacks, however there are many species of sharks in Costa Rica, two of them especially curious as the Tiger Shark and the Bull Shark, which inhabit not only the shallow coasts, but also in the rivers, estuaries and mangroves. It is necessary to use common sense and avoid swimming in deep waters at dawn, dusk or night, and not cross the deep mouths of rivers such as the infamous Sirena River in the Osa Peninsula and others.

Dive sites where to find sharks

Cocos Island is known as the “shark island” as it is one of the few shelters in the world where it is still possible to observe a large abundance of several shark species, which is why it is visited by hundreds of tourists each year. 14 shark species have been reported in the PNIC (Bussing, & López, 2005; Cortés et al., 2012). S

Some species are residents, such as the white tip reef shark (Triaenodon obesus), while others are highly migratory, such as the hammerhead shark (S. lewini) and the whale shark (Rhincodon typus). The underwater mountains, the islets, and the bays represent essential habitats (feeding, resting, cleaning, intercourse areas) for the different shark species.

Also a very prominent site and that is catching all the attention in recent years of diving in Costa Rica is Catalina Islands. Located less than 40min by boat from the marina of Flamingo, an island exclusively for Diving and Snorkeling since it is not inhabited or can not be traveled on it.

Depending on the season we can find giant 7m blankets, white tip sharks, rays, turtles and a lot of fish diversity, you can see huge schools of fish that make it an unforgettable dive.

Definitely a more affordable point for your pocket than Coconut Island, with a lot of variety to show. More than 15 dive sites throughout the area with a vibrant coral growth in volcanic formations with visibility of up to 30m. Bull sharks in the Bat Islands Bat Island regularly attracts large groups of Bull Sharks, creating a full adrenaline dive. At 100 feet (30 m), this area is best for advanced divers.